Meaning of the data displayed on the screen 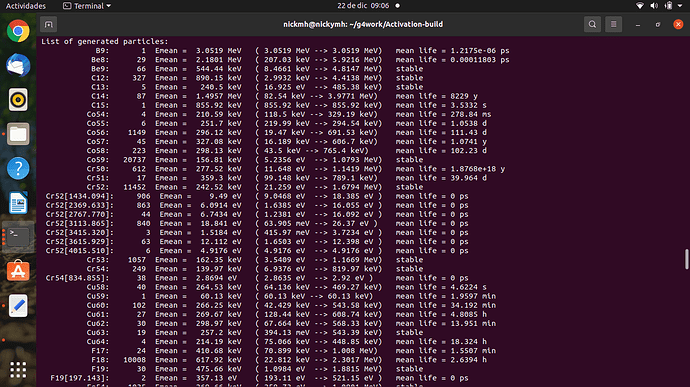 which means the second column. the one that is next to the radioisotopes that are generated. is the amount that is generated at a certain energy? or means something else.
this is the Activation example

Number of events in the indicated channel.

Hello.
Yes, the second column is how often this isotopes was produced.

Is I want to graph the amount of radioisotopes that is produced as a function of protons, does that help me?

How can I know the amount of radioisotope that is produced? i want to calculate the activity produce in every adioisotope

I recommend you take a look into the advanced example ‘STCyclotron’.
It’s basically a solid target, which gets hit by a proton beam and it gives you produced radioisotopes and after running the ‘Plot.C’ file, you get plots for the activity.

How many events did you generate? That’s the number of protons in your beam. Use the number in the output to calculate the rate. For computing the “activity”, use the rate, combined with the produced isotope’s half-life.

So you should be able to do the math.

finally, with these data it is possible to calculate the number of nuclei of each species that are produced?