I am interested in the simulation of gamma energy spectrum, produced during the inelastic scattering of neutrons (14MeV source). When I simulated the gamma flux reaching the detector (scintillation crystal), I saw strange energy peaks on the spectrum.

To investigate these peaks, I’ve created a model with just oxygen in it, and I’ve created a MySteppingAction, where I dumped the particle name, particle energy, and process name for each step to a .csv file. I’ve collected those gammas, that “appeared” after a neutronInelastic process. I’ve found gammas with energies that I anticipated (~6.1MeV, ~ 6.9MeV), but there are ones that shouldn’t be there, or at least, not in these numbers (~5.4MeV or ~2.7 MeV for example), because they are belong to other (not O16) oxygen isotopes. I attached the histogram of this. I’ve tried to build the material from O16 isotope only, and the material library (“G4_O”), and both of them gave me basically the same result. Do you have any idea, what am I doing wrong? 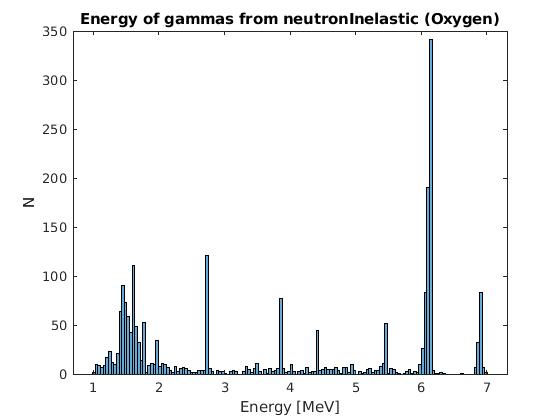 Are all of your events restricted to scattered neutrons (i.e., there’s a neutron secondary in the final state)? Or is this a mix of inelastic scatters and neutron captures (O-16 +n → O-17)?

I’ve only collected those gammas that were created through neutronInelastic.