Based on the work of Mendoza et al., I tried to reproduce the secondary gamma ray spectrum, but I failed and wanted to know the specific settings for GEANT4

Hello everyone,
I would like to replicate the work of Mendoza et al. [1][2]. Based on the theoretical model of “Thin Cylinder”, neutron and secondary gamma ray spectra are obtained. The model is shown in the figure below: 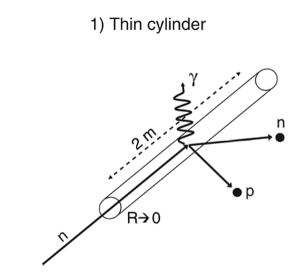 I want to reproduce the results of secondary gamma rays spectra in “Thin Cylinder” geometry. Currently Geant4 uses the Physics List of “Shielding”, and as described in your paper, I define the environment variable “G4NEUTRONHP_DO_NOT_ADJUST_FINAL_STATE”. The ENDF/B-VII.1 is used in this simulation work.
I simulated three nuclides (Si-28, O-16, Ca-40) under GEANT4-10.6.2 and MCNP6.1. The neutron energy spectrum obtained so far is basically the same as that in your paper, as shown in the figure below. 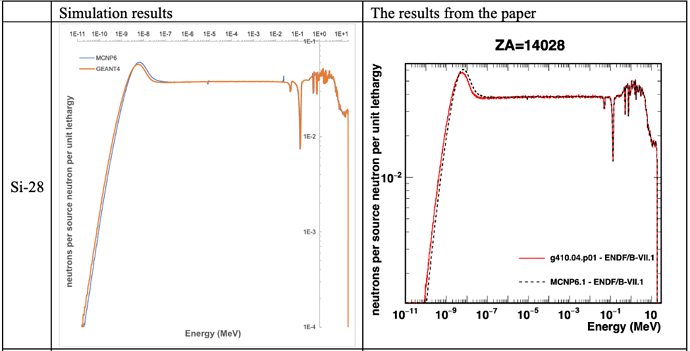 But the secondary gamma-rays energy spectrum is inconsistent in some energy channels. From the figure below, it can be seen that some counts of Geant4 are higher than the result in your paper. O-16 in particular, seems to have some gamma background.

Then I replaced the GEANT4 version with the version used in your paper, which is 10.4.1. But I still get similar inconsistent results (O-16) as shown in the image below. 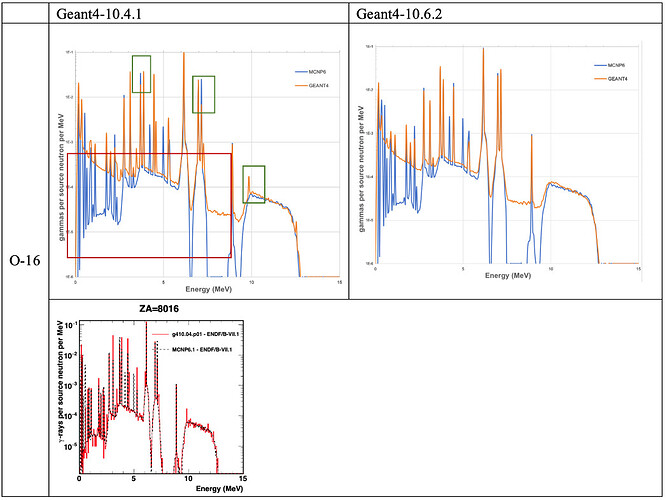 At the moment I cannot determine the reason for such a gamma spectrum. I would like to ask if there is some special treatment for the settings of some environment variables of GEANT4, especially the settings related to gamma. Or, do you have some special handling options for this part of the physics process. …
Thanks in advance for your help!
Sincerely,
Yi Ge