Hi there,
I first used a large area proton detector (5x5 cm^2) for depth dose measurement and got the following results: 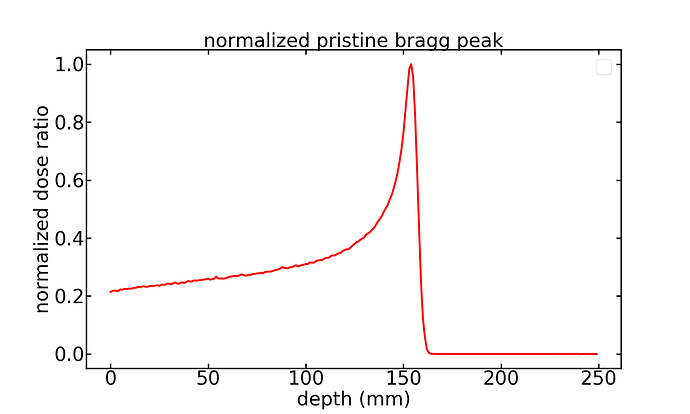 But when I shrunk the cross sectional area of the detector to 5x5 mm^2 the result appeared as this: 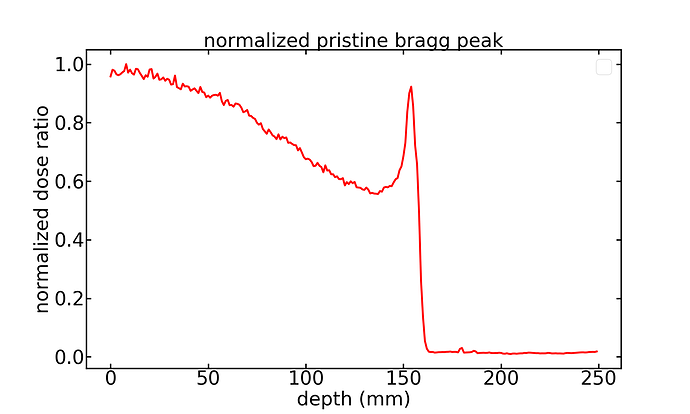 I used a 150MeV proton beam irradiating directly into the detector in water. Could there be a physical explanation for the discrepancy in the results? (I personally thought that the protons might exit the thin detector as they pass through it due to their transverse straggling, could that be a correct explanation?) Or there should be something wrong with my code or with the detector?

What is the transverse size of your beam ?

It’s a Gaussian in x-y direction with sigma=3mm.

Did you visualize few events ?

Could the discrepancy be due to my choice of detector or physics model?
I use G4PSDoseDeposit3D as the scorer, and QGS_BIC as the physics.

If you plot the transverse dose profiles you will see the answer. Alternatively, plot the raw (not normalized) PDDs, and consider the integrals (areas under the curves). Why are they different?

I redo the exercice with example Hadr07, which include hadronic physics.
nima.mac.txt (416 Bytes)

I tracked the protons as they pass through a small vs. large detectors. The material of the detectors is water and the world material is air. It seems that the protons exit the small detector due to transverse straggling though.

Doesn’t it explain the dose plots that I posted before?

your picture is clear.
we got similar plots with Hadr07.