I used VS2019 and cmake 3.16.4 to install the Geant4 on my Win10, and supposedly, it is installed correctly, since I have not seen any errors during the process.

What am I missing?
Any help is greatly appreciated. 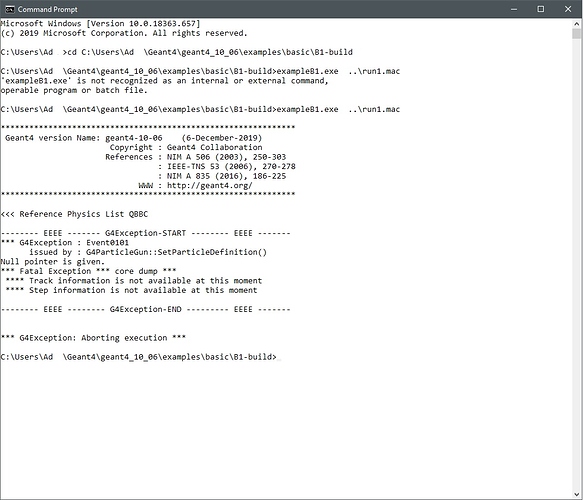 Just to confirm, this is the stock exampleB1 with no modification to the code? The only other things to check are:

I did the following:

Created a folder for the build and moved into it:

Ran cmake to create the various makefiles that are required:

Ran the cmake --build command to compile the code:

Then ran the executable (without moving into the .\Release folder):

Entering .\Release\exampleB1.exe on its own runs the GUI for me (I compiled Geant4 with QT)

Have you configured the required environment variables so that your simulation knows where to find the Geant4 data files etc?

Which build mode did you use to build/install Geant4? If you built it in Release mode, then the example should be as well.

Thank you! After 3 hours of hell this solved the my problem.