Hi,
I tried to enable the “GEANT4_USE_PYTHON” variable in CMake (multithreaded on, so did the GEANT4_BUILD_TLS_MODEL = global-dynamic) and configure → generate was successful.

However, as I run the ‘make’ command, the compiler builds for some time, but then shows this error message:
“clang: error: unable to execute command: posix_spawn failed: Resource temporarily unavailable” 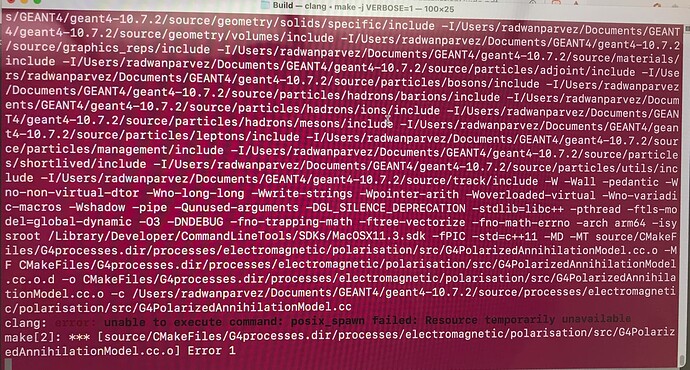 Since the “make” was always unsuccessful (I’ve tried a couple of times), later I decided to uncheck the …_USE_PYTHON option, and then a successful build happened.
But, I was actually eagerly interested to use GEANT4 in python since I’m comfortable in it and my other projects are also in Python.

I don’t think this is anything specific to the Python build being enabled (at least, we’ve never seen this type of error before). All I can see is that you’re running with make -j and this might be overloading the system - perhaps try explicitly setting the argument to the number of cores the system has or lower. A few results on the error message pop up in Google/StackOverflow etc, so may also be worth browsing these to see if there’s anything there that could help resolve things.

I think I’ve done the process by running “make -j8” too, as my processor is 8 core, but the same error appears.

However, now I have successfully installed G4, but without the …_USE_PYTHON option.
If I now run these commands:

On executing the CMake command, it will run to configure the build and generate Unix Makefiles to perform the actual build automatically, right?

and then
$ make
$ make install

Is it gonna take a lot of time as before during the make command?

However, I decided to
$ make uninstall
in the build directory and then manually delete the build folder as well as some folder in the /usr/lib location.
And then I follow the usual procedure (with GEANT4_USE_PYTHON = ON) but this time, changing the
CMAKE_INSTALL_PREFIX=/usr/local
to
CMAKE_INSTALL_PREFIX=Users/radwanparvez/Documents/GEANT4/Install

And then,
configure
generate 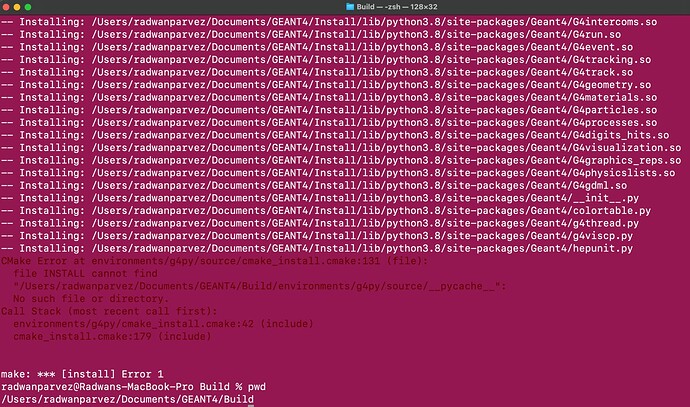 What should I do?

@radwanparvez Have you tried installing geant4 with conda? To install with conda run,

FYI, Python support has been added to geant4 since v10.7.0 (conda install)

As an alternative, You can also look into the geant4_pybind package.

This topic was automatically closed 90 days after the last reply. New replies are no longer allowed.