Geant4 Failing to Match with MCNP6 of some peaks on the Inelastic and Capture Gammas spectrum from the simulations of Neutron-Gammas, like Fe/Ti

I use the Geant4_10.6 and choose the Physical List “FTFP_BERT_HP.hh”. I use the neutron data libraries, ENDF-VII.1, In order to be consistent with MCNP6.
The model is simple. A 14MeV monoenergetic neutron source is placed 30*cm away from the sensitive detector. And all of these in a tub which is full of a kind of element, like Fe/Ti/O.I get the information of Gamma Current spectrum from the detector.

The issue is that Geant4 is giving me the following spectrum,
First, I have not find the characteristic peaks(3.73MeV、3.9MeV) of Ti on the Inelastic Gammas spectrum. And the MCNP6 have got that peaks.

Thanks in advance for your help!
Best regards,
Yi Ge

Hello, I am trying to do the same experiment and comparison as you with mcnp_6.2 and geant4_10_6. For the time being I am working with a sphere and not a tube, but we should get same results.
I tried with a sphere of pure oxygen (1.4g/cc) and pure carbon (2.3g/cc) but I got some bad result, and I am trying to figure out if discrepancies are caused by simulation method (model or cross-section) or because of my geant4 code structure.
As you, I implemented the ENDF-VII.1 as well as I use in addition G4NeutronHP implemented in my NeutronPhysic.cc physic and registered in my main.cc as follow:
G4VModularPhysicsList* physicsList = physListFactory.GetReferencePhysList(physicsListName);
physicsList->ReplacePhysics(new NeutronHPphysics);
runManager->SetUserInitialization(physicsList);

see below results for oxygen: 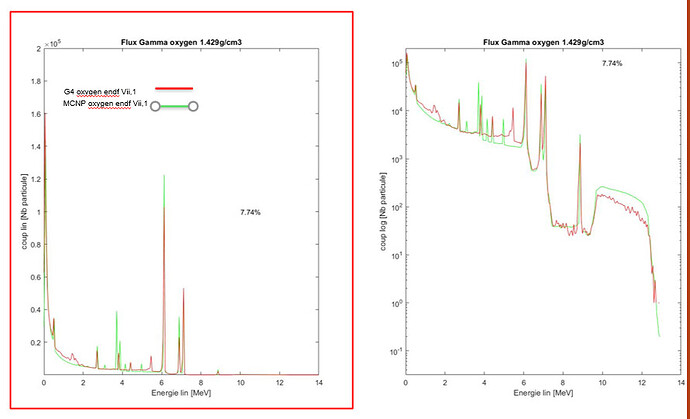 How did you implement your code in mcnp did you use f8 tally for your NaI detector? Or did you get flux of gamma before entering in the detector, so you probably used f2 or f4 tally.
In my case those graphs are flux of induced gamma before entering in my NaI. Then I am trying to figure out what to count in the NaI (remove neutron interactions in the NaI from other gamma interactions) to get real gamma spectrum in NaI detector.

What does the Y-axis repsent in the second figure,

It is the same Y-axis but in log, so it is the number of counts in log (the number of gamma measured before entering in my NaI detector) it is a flux.

I have the same problem with x-rays emitted from a tungsten target.

I have not find the characteristic peaks(3.73MeV、3.9MeV) of Ti on t

Sorry, there is an error here. The Inelastic characteristic peaks of titanium are not 3.73MeV and 3.9MeV.

I tried f1, f2, f6, and f8 talliesgor detectoring gamma and have chosen f1 and f8 tallies for the comparison with Geant4. In order to get real spectrum in scintillator, the biggest problem for me is that f8 tally may be unreliable in neutron-induced gamma scoring, as it scores the total energy deposition of a history (which includes one neutron and all of its resultant particles. Is it true?) Or is there any other reason for the unreliability of f8?

To remove neutron interactions in detector, maybe you can just set imp:n 0 in this detector?

As I understand f8 tally does not include neutron cascade in the NaI detector so normally f8 tally should only score deposited energy from gamma which entering in the detector.

I simulated a f8 tally on mcnp for a pure sphere of oxygen surrounded by a spherical NaI detector. I did the same with g4 with a gamma filter before entering in my NaI. So only gamma produced in my sphere of oxygen (material to investigate) can enter in my scoring volume. Then I get the deposited energy.

The result shows that it works well, see figure below : 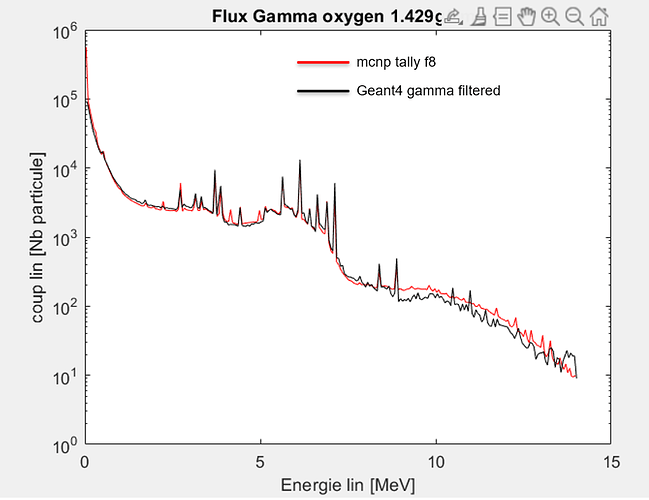 Thanks for your explanation of f8 tally.

But I don’t fully undestand your problem. Do you mean neutron-induced gammas are still produced in NaI (indicating characteristic peaks of Na and I) even when you set imp:n as 0? But neutrons should be immediately killed when entering a 0 importance cell. In fact, I am also trying to tally gammas produced in a specific cell in a more complex model. I made a second run by changing the imp:p value to 0 in this cell and then subtract the spectum from the original one. This is flawed because gamms produced elsewhere entering this cell are also killed.