I’m having an issue regarding the dose deposition of Helium 4 ions in water. My simulation consists in launching a pencil beam (so every particle at 0.0.0) made of He4 ions, fully ionized (so with 2+ charge), with a kinetic energy of 198 MeV, in a box of water. According to the NIST database, the expected range of 198 MeV He4 ions in water is around 22.2 mm. As 50 MeV protons have the same range in water, I also did the simulations with 50 MeV protons to compare both results. The Geant4 version I first used for the simulations was 10.7, and My Bragg peaks appeared at a smaller range than the expected value (see the green curve in the attached figure). However, when I update to Geant4 11.0 (red curve in the attached figure), I can see that the expected range is obtained and fits with the 50 MeV protons result (blue curve).

Did anyone have the same issue with geant4 10.7? I went through the 11.0 release notes but nothing is mentioned regarding the update of He4 ion’s physical processes. And I can’t understand how a version update can make such a massive difference in the range?

Any help would be very appreciated.
Regards 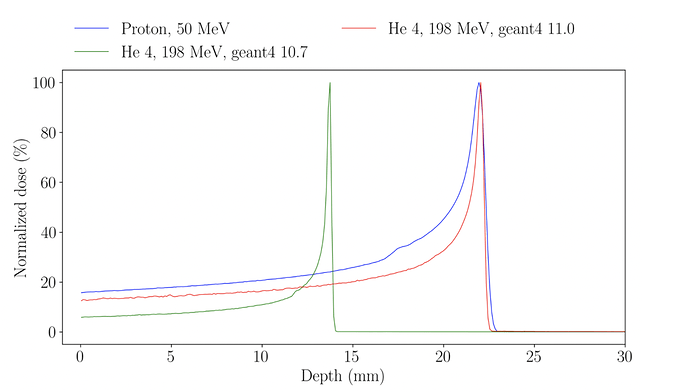 If it is possible, can you tell me how to create a pencil beam in Geant4?
Thank you

Hi, you just create a beam with zero lateral sizes.

can you provide a minimal working example?

Thank you for your time

The problem has been understood and the fix has been introduced in the Geant4 public release 11.0 and in the patches to 10.7.
If not using one of the releases reported above, you may use UI command to solve the problem:
/process/eLoss/ICRU90 false

sorry for inquiring this, but where can I find further explanations about the problem, and which versions are affected? It is not clear from the release notes

Thank you in advance.