When I am using ShieldingLEND (which is Shielding but with LEND instead of HP data libraries), I have found some issues with boron capture energies.

For a simple test, I used the ‘radioprotection’ example and a 1cm3 cube of natural boron (G4_B from NISTManager) in vacuum. I checked the output using /tracking/verbose 1 and saw that incorrect energies were being produced from the neutronInelastic process with Boron-10, the kinetic energy of the particles are double what they should be, please see ‘screenshot 1’ below. The neutron physics that is built when using ‘ShieldingLEND’ physics list option is shown in ‘screenshot 2’.

For reference, the secondary product energies with the 94% B10(n,a)Li7 capture reaction should be alpha=1.47MeV, Li7=0.84MeV, gamma=0.478MeV. The Q value is 2.78MeV. We see that the gamma is correct (it is stated as a discrete energy in the ENDF/LEND data file), but alpha and Li7 seem to be doing some sort of energy balancing that is failing. 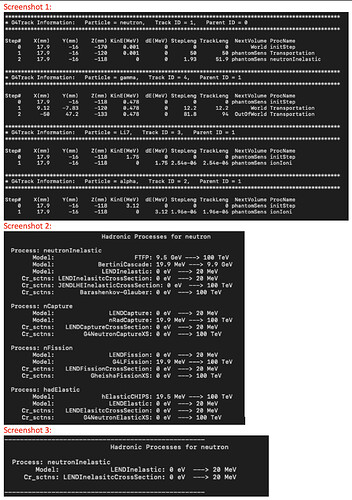 I also tried other materials from NIST such as G4_BORON_CARBIDE and defining the B-10 isotope explicitly using G4Isotope with Z, N, A numbers. I also tried changing the temperature of the material: 0K, 273K, 300K but it was always the same result.

Other interactions such as H1(n,G)H2 have the expected results compared to literature, it is just Boron-10 that is wrong. Interestingly, the number of boron capture reactions per incident neutron is the same for Shielding and ShieldingLEND, just the output KE being different for alpha and Li7.

I then thought that there may be a bug with the overlapping of many cross sections seen here for neutronInelastic. So I then used no prebuilt hadronic physics list and added the LEND model to the neutron inelastic process manually to force only this one to be used as shown above in ‘screenshot 3’.

Unfortunately the same result was given for the boron capture reactions after this physics change. So this tells us that the incorrect energies is due to the LEND inelastic model or its data set.

I have tested this using Geant4 versions: 10.4.p02, 10.5.p01, 10.6.p02. I have also tried on different operating systems: Mac OSX 10.15, CentOS 7 and CentOS 8. I have discussed with other users and they produce the same incorrect KE result independently in their simulations.

Is anyone able to provide any information about this? 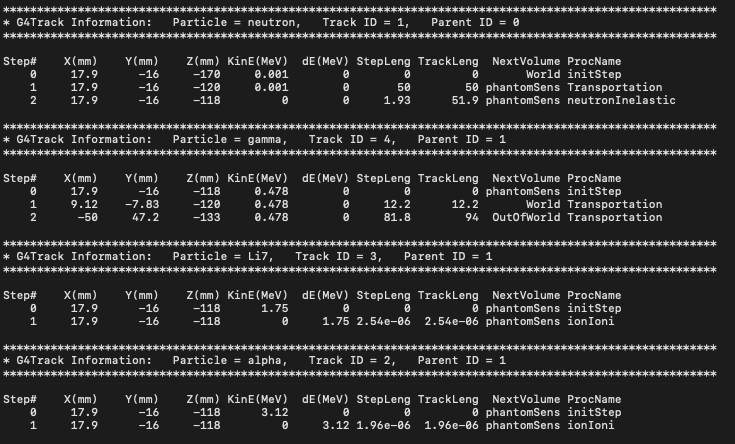 Screenshot 3, single process for neutrons to only use LEND model:

I have done some more testing and found this affects other reactions that have 2+ bodies in the output, for example, Li6(n,a)H3, which also has incorrect output energy like the B10(n,a)Li7 reaction.

To make it more familiar, I used example Hadr03 for better reproducibility, here is the result using QGSP_BIC_HP and ShieldingLEND with B10 isotope target:

We can see from the cross section summary and number of alpha+Li7 particles produced that the cross section data of G4NDL and LEND are the same. Just the issue of incorrect Q and kinetic energy in the output products.

I have found the cause of the issue by looking at the XML files in the LEND data folders. I found in LEND_GND1.3_ENDF.BVII.1/neutrons/005_B_010/005_B_010.000.xml at approximately line 400 under “Program DICTIN”, it has the definition of the particles with their mass and energy states:

However in the GIDI source files of Geant4, located under source/particles/management/src/MCGIDI_mass.cc,
it has the atomic masses of the nuclei stated, but with different values for alpha and Li7:

This fix also corrects other two body output reactions such as Li6(n,a)H3.

Discussion:
The GND1.3 data file used by LEND (the XML file) is the same as one that can be downloaded from the ENDF website for the desired reactions. It also has the different mass definitions for alpha and Li7. If an older evaluation is used, such as ENDF6 the GND file has the same particle masses as GIDI_mass.

I believe that there may have been some slight correction that was made to the GND file to apply a correction, but this hasn’t been realised in the LEND model of Geant4.

My guess is that the GIDI processor for the LEND data files was originally made for ENDF6 and wasn’t updated after some ‘correction’ was made to the GND data file for ENDF7. So when the neutronInelastic process happens, the energy conservation cannot be calculated properly due to different definitions of the particle masses.

What does everyone else think?

This is a major issue that needs to be addressed by the LEND development team. (I have submitted bug report 2300 but haven’t heard back yet).

Hello, I am using the Geant4 example ‘Hadr03’, which you can find in the source code examples:

You will then need to edit the PhysicsList.cc to use ‘ShieldingLEND’ elastic and inelastic physics instead of the HP physics.

You will need to export the path of where the LEND data is by typing into your terminal window. For example if you downloaded the data and put it with the other datasets (this is one line):

Then you can run the example using neutron.mac:

You will know if the LEND data is working properly by looking at the physics process output for neutron. If you see anything about HP, then check the PhysicsList.cc file again:

Obviously you will see the incorrect output energies for the BNCT reaction as I described but you can fix it by following the steps I said in the previous message. Depending on your application, you might not see any errors for your reactions if they are simple neutron interactions (not two+ body).

when i use code you provide, the progran can not Initialize kernel,
can you upload your code? thanks!