I made the next build: qt + multithread + opengl + gdml. The project was generated without any problem, and I think it means I have well Patch ways to Qt and etc in system settings.

After successful project generation I run the vs, choose Release and Win32 options
And then press Build -> Build solution

After that I waited a long time for building and received error LINK2019 with G4interfaces.vcxproj: 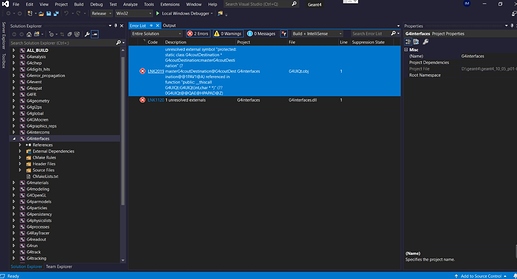 With my current (vs 19 + qt 5.13.1) setted up I can successfuly running projects in the old 10.4p2 version, that was builded year ago with visual studio 2017, without any problem

Thank you for help!

Found that it deals with the multithread option
But why can’t I turn it on in the vs 2019?

Try to comment line 230 at source/interfaces/basic/src/G4UIQt.cc ( masterG4coutDestination = this;). For me it worked, but I’m not totally sure how this affects real output.

I’m afraid multithreading is not available on Windows “at present”. See e.g. http://geant4-userdoc.web.cern.ch/geant4-userdoc/UsersGuides/InstallationGuide/html/installguide.html. I suppose that you must not have selected the multithreading option when you successfully built Geant4 with VS2017 in the past.

Multithreading on Windows should work since 10.5 (yes, I missed updating that part of the docs, apologies). However, note that VS2019 and Qt 5.13 are not tested or supported yet so we cannot guarantee functionality yet.

I’d suggest first trying to build Geant4 10.5 on its own, without any modifications to the source code and so other options than GEANT4_BUILD_MULTITHREADED set to ON. Let’s see if that works to see if VS2019 is o.k., then gradually add options, as the source of the problem appears to be G4QtUI.

Geant4 10.5.p01 builds successfully when GEANT4_BUILD_MULTITHREADED is off, but fails if it is switched on.

A further update. If I switch QT off and switch OPEN_GL_WIN32 on then Geant4 10.5.p01 successfully builds with GEANT4_BUILD_MULTITHREADED on.

Simulations run in multi-threaded mode, and I can visualise results using the OPEN_GL_WIN32 driver (a bit clunky, but it works).

A patch fixing this problem is going to be released soon with 10.6.p01.
For reference, see Bugzilla ticket: https://bugzilla-geant4.kek.jp/show_bug.cgi?id=2217