Hi, I am new to this forum and I installed Geant4 10.05.p01 some days ago, using Visual studio 2017 and Cmake 3.15 on Windows 10. I’m trying to run example B1 but when it runs there are some visualization problems with OpenGL. The application does not respond and the image visualized is this. I have NVIDIA GeForce GTX 750 Ti with OpenGL 4.4. I swear someone could help me find a solution. Thank you all . 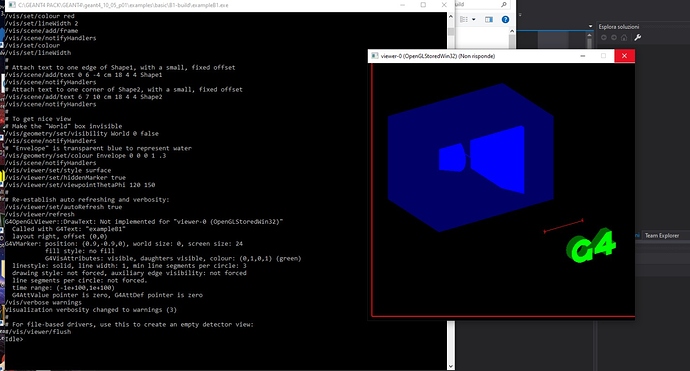 Hi. That looks pretty good to me. The image doesn’t look quite right but maybe that’s something to do with OpenGL on Windows. Maybe it would look better if you made one of the volumes invisible:
/vis/geometry/set/visibility Envelope 0 false
Unfortunately, text is not implemented on Windows.
When you say, “the application does not respond”, it looks like it has responded with Idle>. You should type something in there, such as/run/beamOn 100.
Please get back to us if I have not understood you.

Thank you Allison , I tried to run and it works, OpenGL does not respond, but in spite of this, the graphic with the beam works . Is this a problem ? I swear it is a kind of bug of Windows or something like this . Thank you

Hi. The “simple” OGL window (OGLSWin32) is not interactive, so yes, that explains why it does not respond. It is not a Windows bug, more a Geant4 feature. To get an interactive window you would have to build with Qt.
John

Thank you so much John

Hi. Just to point out that if the capture of Geant4 commands is on the terminal (DOS or a CYGWIN prompt), then clearly the Windows events are not treated, and then the GLWin32 window can’t be responsive. At the time the OpenGL Win32 driver had been introduced (…long time ago!), it was though to cowork with the “G4UIWin32” which is a simple GUI window done by using Microsoft Win32 widgets (and then with a widget to capture G4 commands) which then treated the Windows “messages” (according Microsoft terminology). And then if using this GUI, you had no “blocking” since the steering of the app was done by a traditional Windows message loop treatment (for both the capture of G4 commands and the graphics windows). 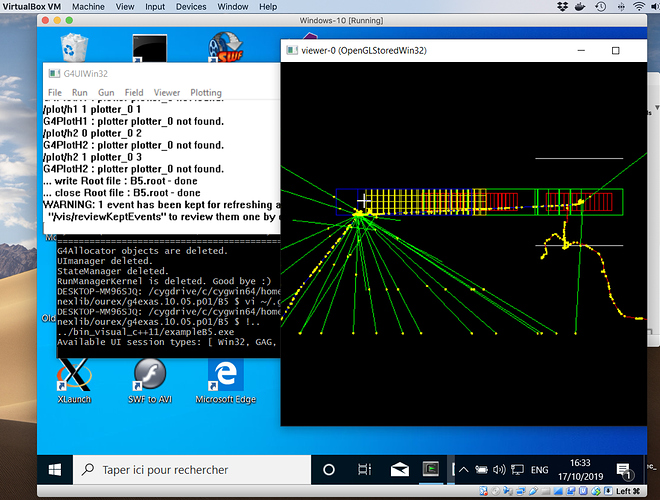 Hi. We have been looking deeper into this. We have a suggestion. Are you able to change Geant4 source code and rebuild the libraries and your application? If so, we would like you to add isGUI = true; after line 144 in G4UIExecutive.cc so that it reads

Please give this a try if you can and report back to us. Even better, please try basic example B2a or B5, which execute gui.mac and add buttons to the window; please try the buttons.

As the original contributor has not replied, I will: for me the same issue occurs under Windows 10 with OpenGL. I noticed in the source code that the suggested fix is already implemented in the latest version, but sadly the same problems occur. Thought I’d share this as I’m dealing with the same issue as the original post.

Hello, I think it’s not an issue , cause I fixed it with this : /vis/geometry/set/visibility Envelope 0 false, advised by John Allison . I swear you’ll fix it .

Just to further clarify I also had the same problem and the below fixed it to a certain extent.

This makes the visualisation look good enough to use but you also need to accept that OpenGL on Windows is not at all interactive!