Parallel Plate Detector not scoring all secondary electrons being produced

I am hoping to gain some insight/advice with a current issue in my Geant4 simulation. My simulation is supposed to model a parallel plate detector comprised of two copper plates (5cm x 5cm x 1mm) spaced apart from each other by 1cm, encompassed by a world of air, and a 3,600 V/m uniform electric field running from plate to plate. A general particle source sits evenly between the two plates and emits an alpha particle of 5.486 MeV. The goal is that the alpha heavily ionizes the air and the electric field drifts the secondary electrons to the positive plate which is then scored as charge, representing real-life parallel plate detectors to be used in muography.

For scoring, I am using primitive scoring in the Detector Construction class. Each plate has a G4PSCellCharge scorer attached to the geometry, and the volume of air between the two plates has a G4PSTrackLength scorer to track how far the alpha travels (to validate the correct amount of secondaries are being produced: 10,000 e-/cm according to a reference book), and G4PSNofSecondary to see how many electrons are being produced.

The physics list I am using is G4EmStandardPhysics_opt4 with a Default Cut Value of 1 micrometer and a minimum production energy of 1 eV.

This combination allows me to see the expected amount of secondaries produced in the air volume, but for some reason I am seeing only a fraction of the secondary electrons being recorded in the positive plate. If 50,000 secondaries are produced, around 10,000 are scored by the G4PSCellCharge scorer of the copper plate.

My ideas for this problem is that the secondaries being produced by the alpha are losing all of the kinetic energy in the less than 1cm travel room to the plates, but I feel like the electric field would prevent that from happening. The other idea is that there may be something wrong with the way I had set up my scoring, or I am just completely oblivious to some physical process happening here. Also, the real-life detectors are seeing on average around 10,000 e-/alpha emitted using an Americium-241 source so I have that as a baseline to follow.

Thank you for taking the time to read this, please let me know if there is any more information needed to get a better understand of the simulation I am trying to run as well as the problems I am encountering! 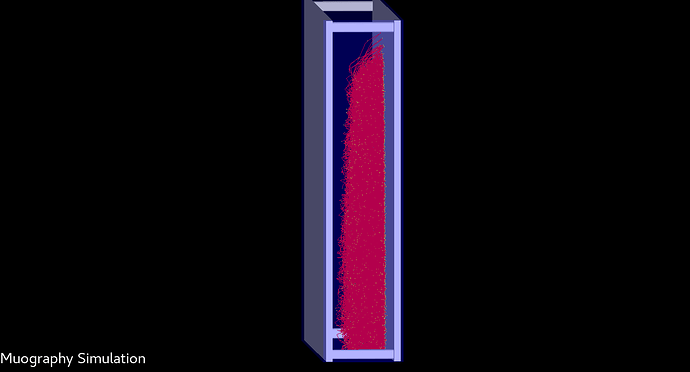