This is going to be a long post, so in short:

Ok, so starting from the beginning:

After adding “.root” to output file name in “hanson.mac” we get another error from hanson.C:

That’s not very helpful, but I’ve found that it is just a wrong histogram name. G4 analysis output ROOT files have histograms called “h12” while “hanson.C” calls just for just “12”:

So it requires to change it into:

and the following two histograms

After running ./TestEm5 hanson.mac for three times (to generate opt0, opt3, and local models), we get the following result: 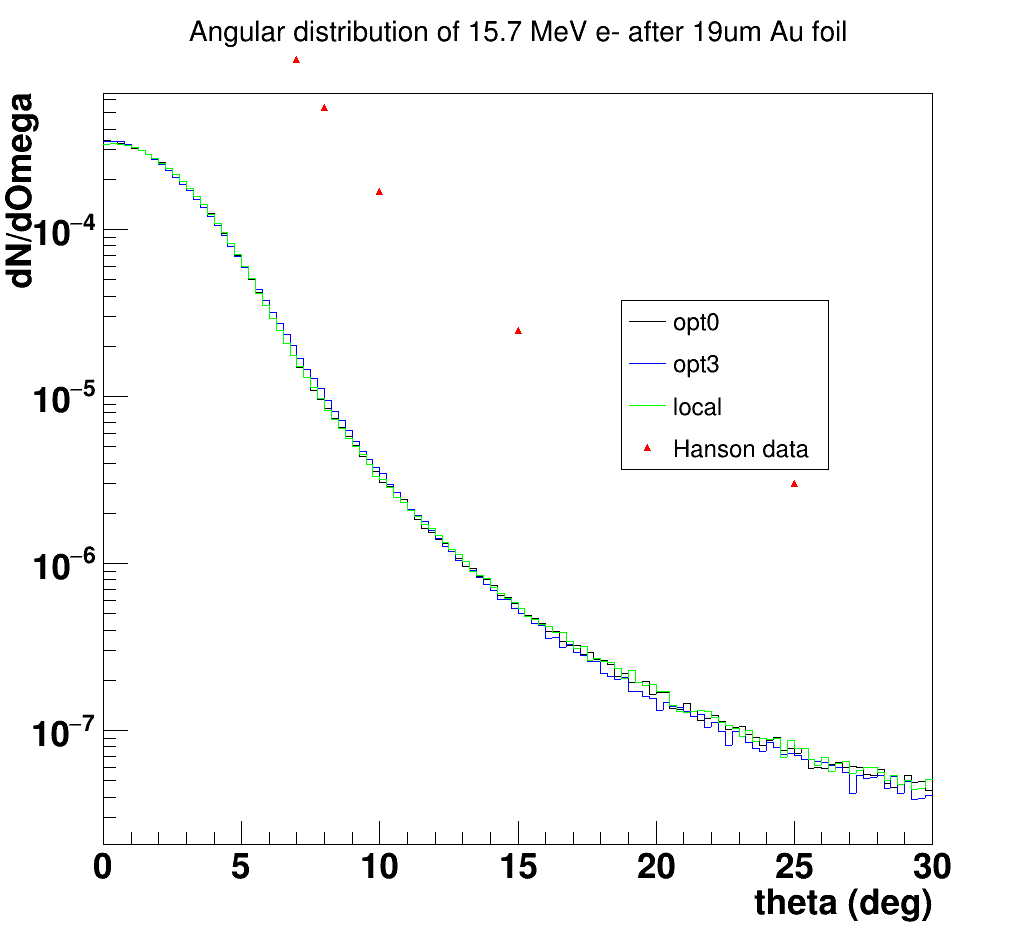 There is an obvious problem with normalization. First I tried a couple of standard tricks like:

and other combinations of normalizing \theta histograms with integral, bin width etc. but nothing really worked.

Then, I looked into TestEm5 source code, especially “TrackingAction.cc” where the normalization (weight) is calculated for histograms 12, 22, 32 and 42:

“unit” is (radian/degree) = 0.01745(…), while “dteta” and “theta” are in (degree). Simple dimensional analysis shows that this weight has wrong units (this formula will give (radian/degree^3) unit which is nonsensical, should be 1/degree^2).

So the weight should be calculated as follows:

which will give the correct unit of (1/degree^2), as in the original Hanson et al. article. After that correction, recompiling, and running ./TestEm5 hanson.mac three times more we get: 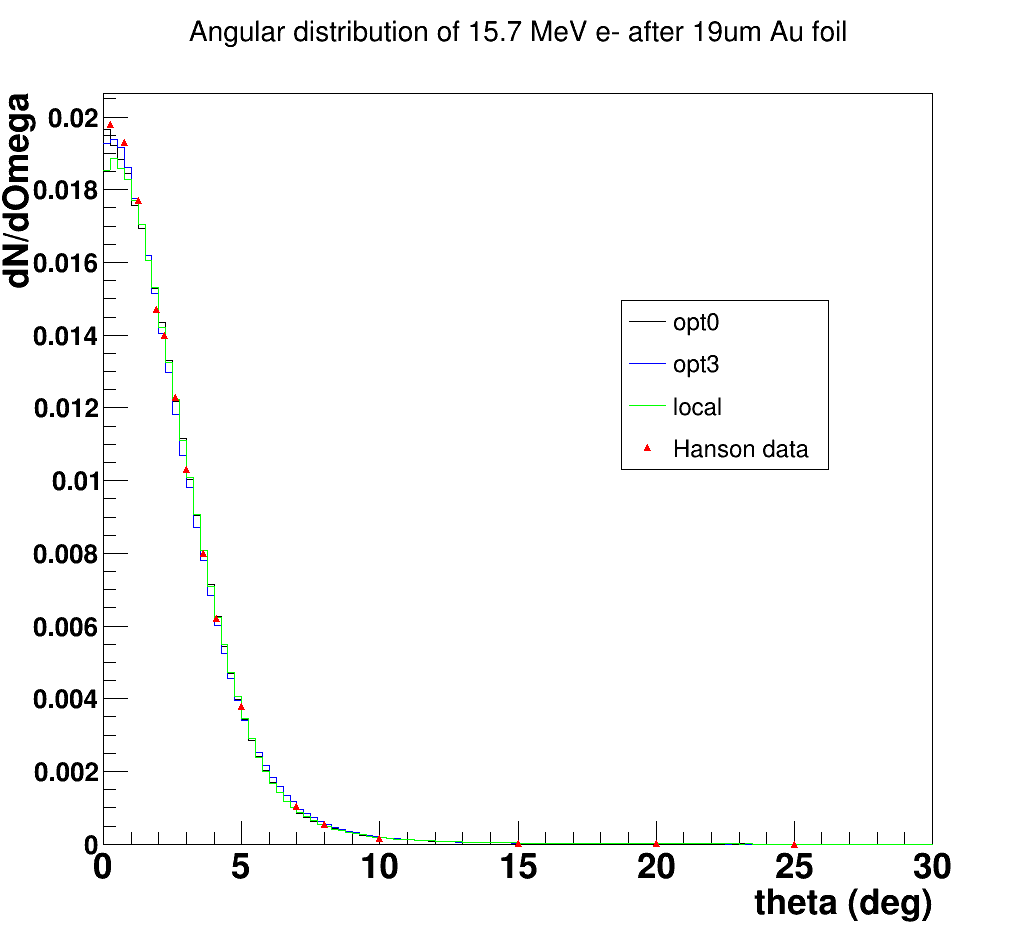 Pretty good, but I was a bit puzzled with two things: low angle scattering seems to deviate from ‘local’ physics list, and these data which are shipped with TestEm5 have data points at different \theta angle than the original article (notice that data points at 15, 20, 25 degrees are shifted ~2 degrees to the right in the original Hanson et al. data). There are also much more data points in the Hanson’s article: 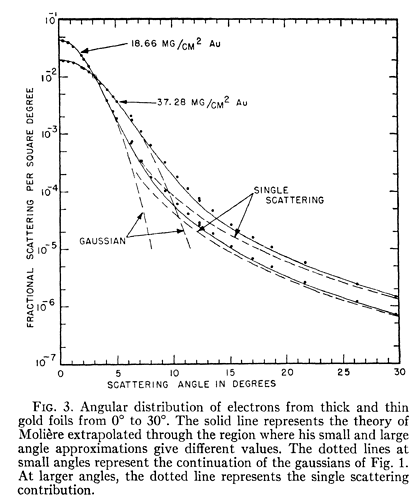 This prompted me to digitize Hanson et al. data by myself. Then, I noticed that not only 20, 25 degrees point were approximated, but low angle points are quite off: 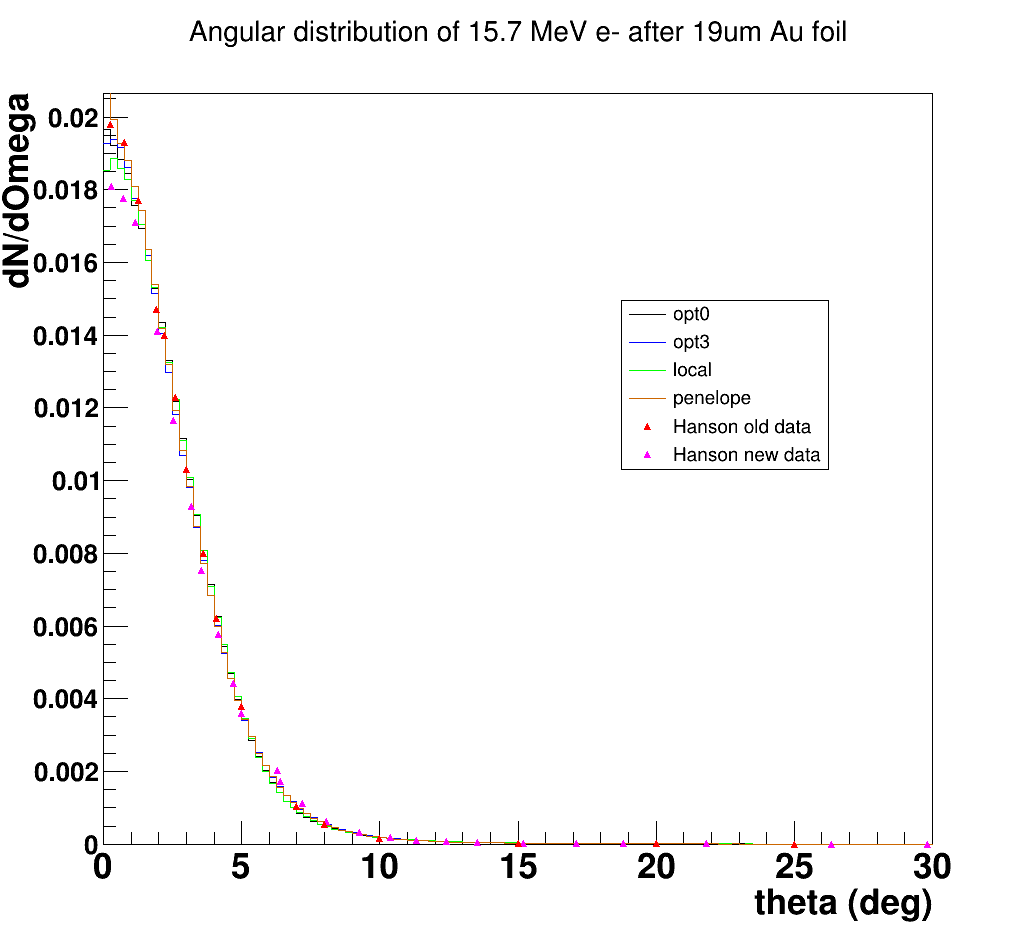 “Hanson old data” are data points from the ASCII file distributed together with TestEm5, “Hanson new data” are manually digitized by me. What is a bit worrying is that models actually fit better the old wrongly digitized data…

Of course, when you plot everything on a log scale, the difference is negligeble: 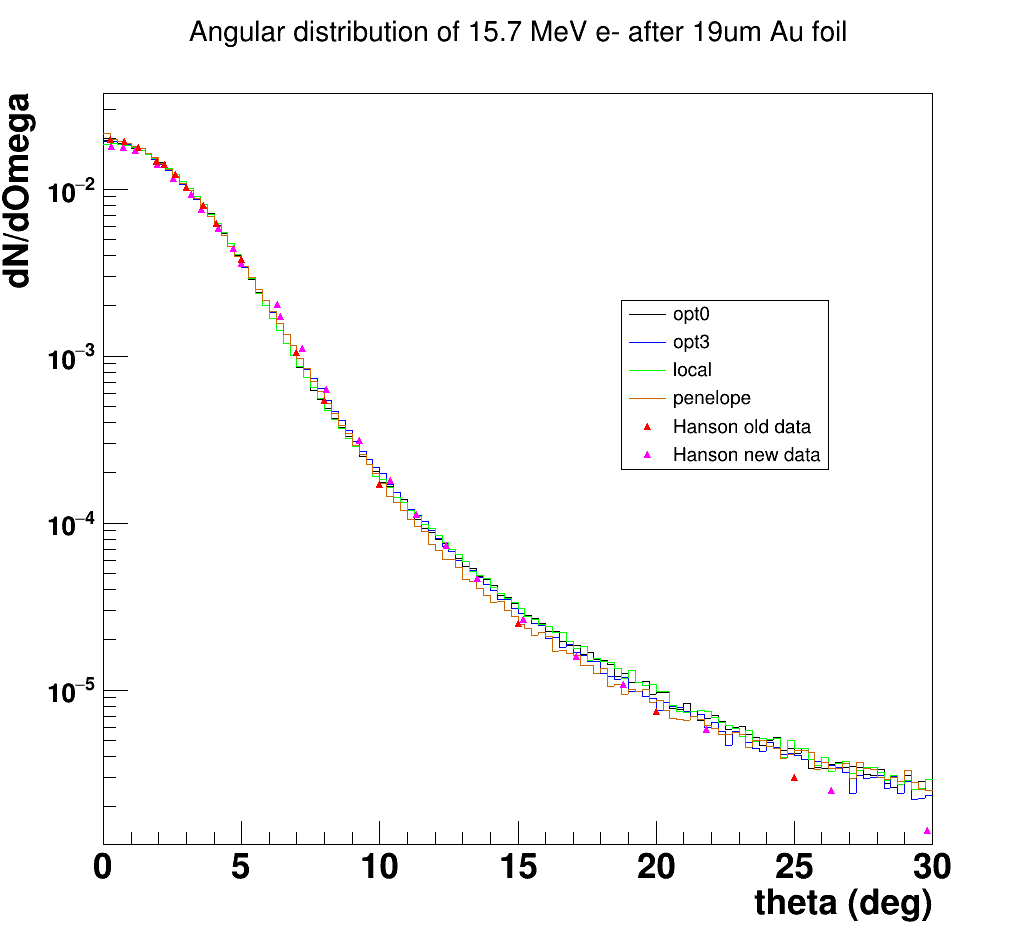 hansonNewVsOldLog1036×938 12.4 KB
Interestingly, Penelope physics list deviates the most from the correct data.

Ok, so this is the end of the story. It seems that all models overestimate slightly number of not deflected electrons (\theta<0.25 degree). Is it something what people are aware off? Also, this physics validation:
http://geant4.web.cern.ch/sites/geant4.web.cern.ch/files/geant4/collaboration/working_groups/electromagnetic/verification/angle2.gif
compares against wrong data (with overestimated number of low scattering events) and shows good agreement (!). Are there any more recent validation efforts which verify multiple scattering process? Who shall I contact to repair bugs in TestEm5 example and update Hanson data?

Thanks to your clear report.

For sure, it would be good to open a bugzilla item. A short summary with a pointer to your post would be enough.

There are two things in your report. 1- the bugs in TestEm5 that I will try to correct with you. 2 - your reevaluation on Hanson data that you must discuss directly with Laszlo : laszlo.urban@cern.ch

thanks for your excellent report.
The bugs in the code and root macro probably
will be corrected by Michel (Maire).
I would like to make tests with the ‘old’ and ‘new’ Hanson data.
Could you send me the file with the ‘new’ data, please?

Thank you for this analysis. This is the one of most old examples, which includes extended analysis, many histograms and macro files. Not all are validated for the recent releases.

Michel have fixed TestEm5 and the fix will be available in the next public release.

from Laszlo : " The bugs in the code and root macro probably will be corrected by Michel (Maire). "

Done. Will be included in the next public correction patch. Not necessary to open a bugzilla item.
For time being, I did not put ‘new’ Hanson data. Waiting for Laszlo - Weronica exchange.