I am trying to implement a Sensitive Detector for several pieces of silicon in a instrument design.

The creation of the SD and assignment to the relevant logical volumes seems ok (as far as I can tell) and the SD::Initialize and SD::EndofEvent get called when I shoot a photon at the silicon, but I am having a tough time trying to understand why SD::ProcessHits never gets called at each step while there is a track in the Silicon.

I can see by having tracking/verbose at 2 that the photon (5.9keV) and the resulting secondaries are interacting as expected in the silicon, but the kernel is just not calling SD::ProcessEvents, so I am unable to extract the hit info I need.

If anyone has any suggestions or tricks on how I might debug this problem, I would be most grateful to hear from you.

UPDATE:
I set a breakpoint in a user stepping action to query what was going on when I was going thru what I believe was the sensitive detector volume. and found something I cannot explain, which may be related to the problem.
For context, I am reading in my geometry via a GDML file and using the example G04 example in persistency as a guide. 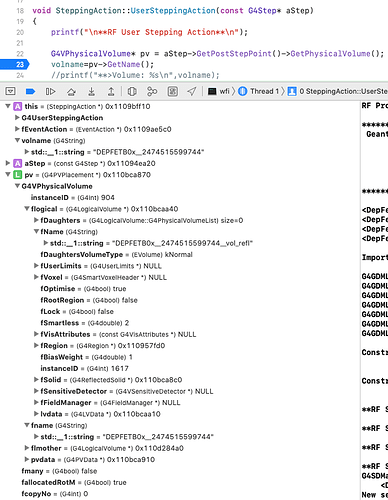 Hi Richard,
the appended “_refl” string means that the original geometry from which your GDML was generated, includes reflected volumes (or tree of volumes). Therefore those volumes with “_refl” appended belong to the reflected tree of volumes.
Cheers, Gabriele

Is there anyway to get the GDML parser to make sensitive the reflected logical volumes it creates?

Yes, I am doing that now I know to look for DEPFETB0x__2474515599744__vol_refl in the Logical volume store after I read in the gdml file and set it to be sensitive. I am now seeing SD::ProcessHits being called, which seems like progress. But the problem, it is being called with a valid G4Step* , but the G4TouchableHistory* is NULL causing a fault. I suspect that may be another issue.