Strange distribution of kinetic energy of evaporated fragments in G4Evaporation

Dear colleagues, I am developing a code that simulate the hadronic interaction of relativistic nuclei. So, I exploit a G4Evaporation as an evaporation model in realisation of Geant4v10.4. I noticed that after the decays fragments with longitudinal momentum twice as big as initial one. The issue was in kinetic energy after G4Evaporation.

In picture the distribution of kinetic energy of different fragments (n, p and alphas) obtained in the decay of Yb-160 with excitation energy equal to 1.55 MeV/n in CMS for three different methods to model evaporation: G4Evaporation with OPTxs set to 3 (by default, red), G4Evaporation with OPTxs set to 0 (blue) and ABLAXX implementation in Geant4 (green). Also, the data obtained by Charity et al. were also depiced. 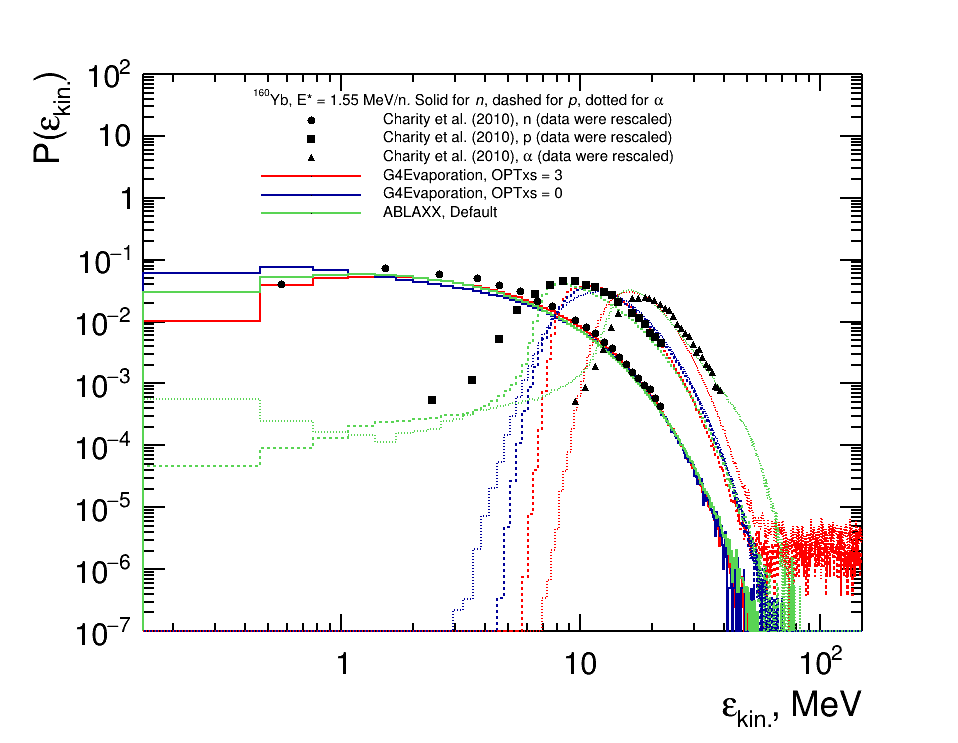 As one can notice, the evaporation spectra of neutrons is describe well by all the methods. Nevertheless, proton and alpha-particle spectra is described better with ABLAXX then with G4Evaporation. Also, the G4Evaporation with OPTxs set to 3 posess some percularity in charged fragment spectra.

Other variant of sampling is implemented at G4EvaporationProbability::SampleKineticEnergy() (blue histogram in the picture) and only exploited when varible OPTxs is set to 0. It seems work better. But OPTxs is set to 3 by default.