I have a question about the PIXE model.

If I simulate a simple charged particle that moves in a uniform material (alpha particle) and I set the PIXE model to False (/process/em/pixe 0) and I set a secondary production threshold at 100 keV, I obtain that the particle does some steps and deposit its energy by ionization, without secondary particles, and it’s ok.

If I set the PIXE model to True (/process/em/pixe 1), a lot of secondary electrons with low energy are produced. For an alpha particle of 5 MeV in a material consisting of C and H, I obtain about 600 electrons of 256 or 264 or 273 eV.

Why that behavior?
Is it normal that so many electrons are produced only for one alpha?
Why do they have only those three energies?
Why the production threshold is ignored?

I am sorry but it is difficult to understand results of your simulations. I would suggest to try out $G4INSTALL/examples/extended/electromagnetic/TestEm5 and macro file pixe.mac

You do not change code of the example only play with macro files and histograms.

Thank you for your suggestion.

I tried to simulate the same physical problem with the example TestEm5.
I have modified the pixe.mac file as follow, only to have alpha particles of 5.3 MeV in water:

The difference between my previous data and these results I think is due to the fact that my material was different from water, but the concept is the same.

Thank you for your help!

I’d like to add two new topics to this behavior, and I hope that someone could help me.

I have simulated the decay of Am241 and using the “/tracking/verbose 2” command I saw that a lot of X-rays from K shell (101.574 and 97.498 keV) are produced if PIXE is OFF as a consequence of these internal conversion transitions: 59.54 -> 0 keV and 102.96 -> 59.54 keV.
I don’t understand how is it possible: in fact from that excited state no internal conversions on K shell are allowed (in fact, the PhotonEvaporation file is correct and the probability is set to 0).
I if simulate the Am241 decay gamma spectrum of HPGe detector, I see that the spectrum is very different from the experimental one because these (and other) high energy X-ray peaks are should not be present.

If I turn ON the PIXE, these X-rays are not produced with this high probability anymore and the “gamma spectrum” of the Am241 decay is compatible with the experimental one.

I have attached a comparison of the HPGe simulated spectra of Am241 with and without PIXE (red and blue respectively).
I have also attached an output of the tracking/verbose when a 102 X-ray is generated as a consequence of the IC of the 59.5 keV state.

Second one: Electron produced by PIXE

As I reported in the previous posts, I saw that when the PIXE is turned ON a lot of secondary electrons of very low energy are produced during ionization steps (thousands of few eV (or tenth of eV) electrons) in low Z materials.
For example, only one alpha produced in Am241 decay produces something like 2000-3000 secondary electrons in SiO2.

Are these behaviors correct? Is it normal that so many electrons are produced?
Why the production threshold is ignored? 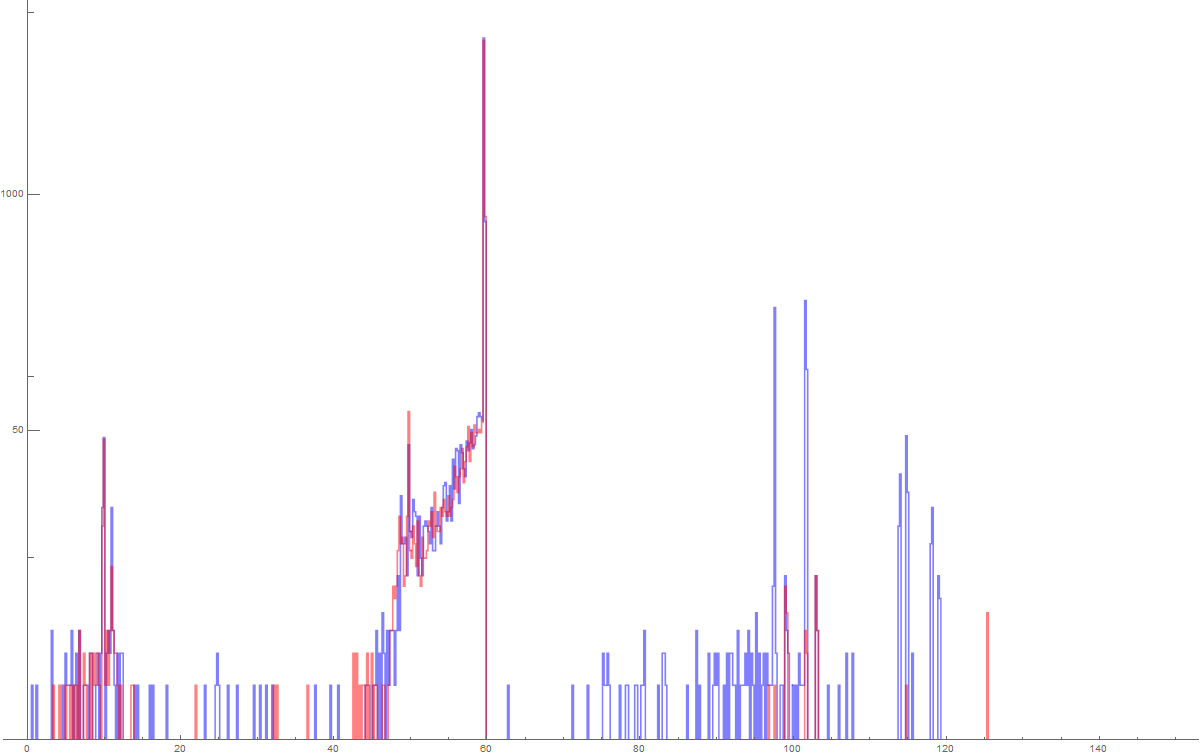 So, I have created a report in Bugzilla.