When I checked proton energy distribution just before proton inelastic scattering, there was a strange structure at ~380 MeV.
The bottom figure shows the distribution confirmed using FTFP_BERT_HP, but it can be seen even in QGSP_BIC_HP and INCL++.
Do you know the reason?
Geant4 version is 10.05.p01, and I generated 100,000 protons with 1 MeV - 1 GeV in water. 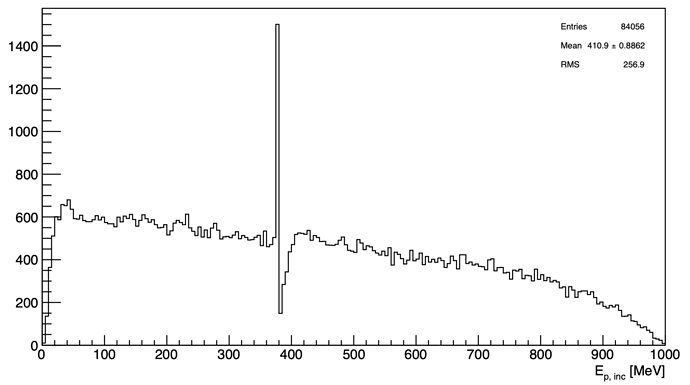 The experiment is Super-Kamiokande (SK), and I generated 100,000 protons with 1 MeV - 1 GeV from the center of SK isotropically.
From the setup, I think that protons interact with free protons or oxygen nuclei only.

What is on the figure, the deposited energy spectrum or something else?
Protons usually interact with electrons in a dense medium. At these energies, they gradually deposit energies along the track. There are elastic scattering and other nucleus-scattering processes, but I would not expect such a sharp peak.

That looks odd. Generated 100000 protons, and almost all of them undergo inelastic scattering in water. Have you tried other G4 versions to confirm the behavior? 10.05 seems rather old.

I’ve not tried other Geant4 versions.
But recently, I found that the position of strange shape depends on max value of refractive index in water.
We define refractive index in water for optical photon with wavelength of from 200 nm to 800 nm, and the range of refractive index is from 1.32885 (for 800 nm) to 1.42535 (for 200 nm).
If we use 1.42535 and proton mass (938.272 MeV) to calculate Cherenkov threshold, the kinetic energy becomes 378.437 MeV that is consistent with the position of strange structure.
Moreover I confirmed that the strange structure disappeared when I turned off optical process (Cherenkov radiation).

The plot you present, if I got you right, is not an energy distribution in general but one of the specific portion of particles that undergo a particular process. It is, in principle, an inelastic process with electrons. It could be like this, as the Cherenkov process might be written as inelastic in the Geant4 core.

Changing versions may not help, as we see physics here. Though, could be tried, just to update to a better one. What idea do you have by studying this specific energy distribution of the particle population slice?

It is, in principle, an inelastic process with electrons.

Sorry, I don’t understand here…
I would appreciate it if you tell me in a little more detail.

It could be like this, as the Cherenkov process might be written as inelastic in the Geant4 core.

Oh, I see…
That’s why strange structure exists when we check distributions about inelastic scattering, right?

Though, could be tried, just to update to a better one.

Yes, I would like to check using other versions if I can.

What idea do you have by studying this specific energy distribution of the particle population slice?

So far I checked the change of the number of neutrons generated in water by the difference of physics model.
During the study, I happened to see the strange structure and I asked Geant4 Forum for it because it bothered me.
But we believe this strange structure won’t affect to physics analyses.

My wild educated guess was that the Cherenkov process might be somehow connected to inelastic, i.e., non-energy-conserving interactions with electrons. When a particle radiates on a straight path and loses energy, it has to interact with something in a Monte Carlo simulation. Therefore, some inelastic processes.

I guess it is just physics we see here, and a newer version would show it more accurately, but the disappearance of the peak looks unlikely.

I see, thank you so much for your comments!