Hi all,
I am involved in the dosimetric characterization of a cyclotron beamline, but Geant4-simulated Bragg peak does not match experimental data when a scattering foil is in place, while modelling an unscattered beam yields good agreement.

Briefly speaking, the beamline consists of a 80 um Ta scattering foil, Steel beampipe ~2.5 m, Kapton exit window, and a transmission chamber. Bragg peak is scored in a block of PMMA (perspex) after the beamline exit. I realized some proton lose energy while traveling along the beampipe (and this energy loss exhibits high dependence on the step length limitation), thus resulting in a low-energy tail after the beamline exit: 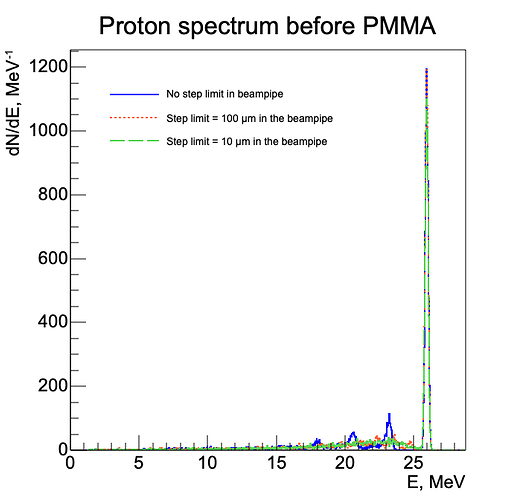 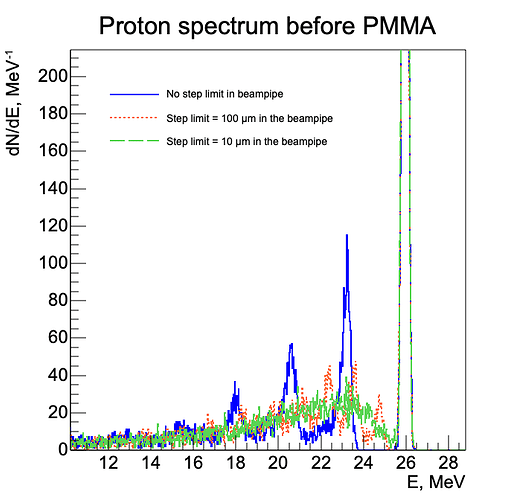 Besides, that low-energy tail in the simulations leads to an elevated plateau of the Bragg peak due to the lower range of lower-energy protons, see the scattered beam BP below: 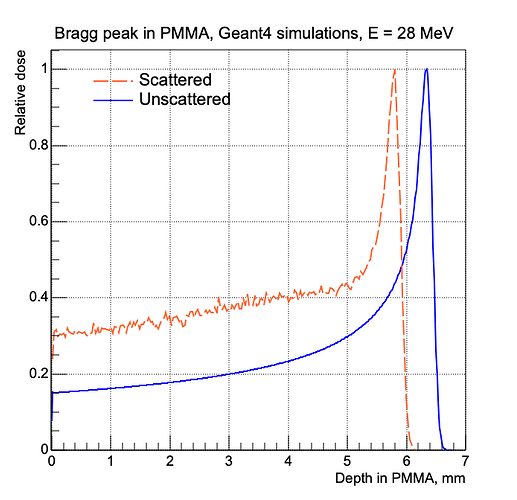 My hypothesis was that as protons go along the beamline, I get more and more protons losing energy in the beamline walls and being scattered back into the beam. Ultimately, it results in a low-energy tail which, in turn, makes the Bragg peak’s plateau much higher, see below:

First, I thought that it had something to do with the internal Geant4 parameters such as step length/production cut or even StepFunction(). However, tweaking those (ultimately, I set production cut = 10 um and step length = 10 um) just led to smoother curves and not to a lower Bragg peak plateau.

Recently, I have collected experimental data with an ion chamber for unscattered and scattered beams. It turns out my hypothesis is wrong since the empirical Bragg peak for a scattered beam does not have such an elevated plateau. 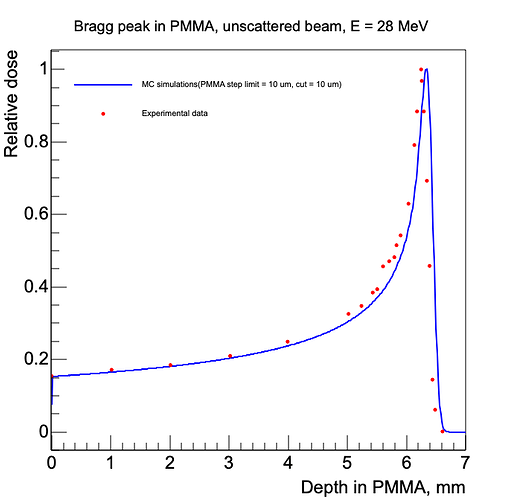 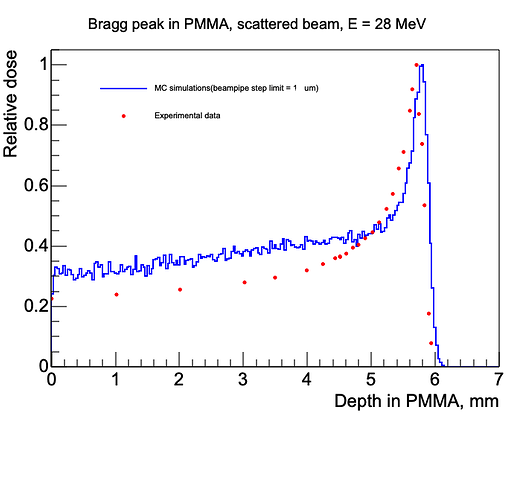 No changes were observed while trying different Geant4 versions (10.07.p01/11.0.0) nor physics lists (QGSP_BIC_(HP_)EMY/EMZ, QGSP_BERT_(HP_)EMY/EMZ). Assuming that my experimental data is reliable, there should be something wrong with the proton interactions in the beampipe walls. I have done my best trying to figure out what is wrong, but with no final thought.

Would really appreciate some pieces of advice on where the issues may stem from.

Thanks in advance,
Vasily

the effect you are observing is unclear. For full understanding of what happens I would suggest to study simulation histories. For that you may repeat simulation and print out all events ID, in which energy loss of a proton at exit of the window is above 2 MeV. In the second run you may use UI command “/tracking/verbose 2”. The second run may be done, for example, for limited number of events. Define number of events equal to the eventID of the first case of large energy loss. If you enable tracking verbosity your log file will be long but if you know that the last event is what you interest for, then you will have a chance to understand what happens with the proton and which particles hit the target.

The different shape of the Bragg peak may meen, for exan^mple, that there is more tahn one proton. It is not easy to guess but tracking verbosity should help explain the situation. in general, I do not think that problem is in physics list or in step limit. For me it is likely specific of the geometry or the application.

May I ask your energy loss corresponding to the range shift in your third figure? Intuitively my experience warns me that the increase in proximal dose is disproportionate for that range shift.

BTW, your hypothesis: “My hypothesis was that as protons go along the beamline, I get more and more protons losing energy in the beamline walls and being scattered back into the beam. Ultimately, it results in a low-energy tail which, in turn, makes the Bragg peak’s plateau much higher” is partially correct.

The degrader (scatterer) will result in an increase of the energy spectra which will increase the emittance the beam which results in more particles “scraping” the beam pipe resulting in the long tail.