As a follow up to a question asked about a month ago (Question in neutron capture (Gd155(n, gamma)Gd156) reaction), I have been examining thermal neutron capture gamma ray spectra using a simple Geant4 program and geometry. I have found some disturbing disagreements between published experimental spectra and the simulation outputs.

The simulation has a very simple geometry. (See Figure - ignore blue box which wasn’t used. +X-axis is vertical along right hand edge of red box. +Z axis is horizontal to the right along the centers of the red, magenta and cyan solids.) The geometry consists of a 7.62cm diameter x 7.62cm length cylindrical detector (cyan) with symmetry axis in the X direction; a 30cm (X) x 30cm (Y) x 1cm (Z) box target (magenta) and a surrounding 4m (X) x 4m (Y) x 2m (Z) box (red). The target material was varied but everything else was G4_Galactic (vacuum). The thickness (Z direction) of the target was kept deliberately thin (1cm except as noted below) so that scattering and absorption of gamma rays and X-rays were minimized. I fired 10^8 thermal neutrons per simulation (except as noted) with nominal ‘thermal’ energy of 0.025 eV from an isotropically emitting GPS point source placed 7.5cm along the +Z axis from the front face of the target. The detector was 20 cm behind (to the left of) the back (left hand) face of the target centered on the target Z-axis. Any gamma entering the detector volume was scored in a Root TTree. Sample spectra are shown in the following Figure for 60Ni. 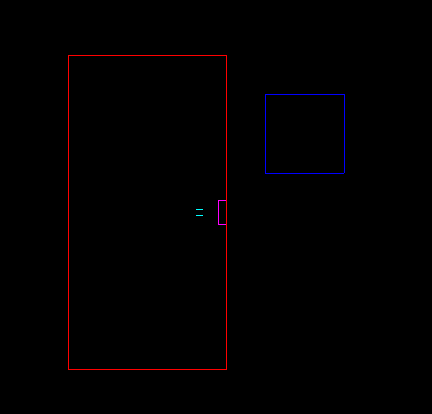 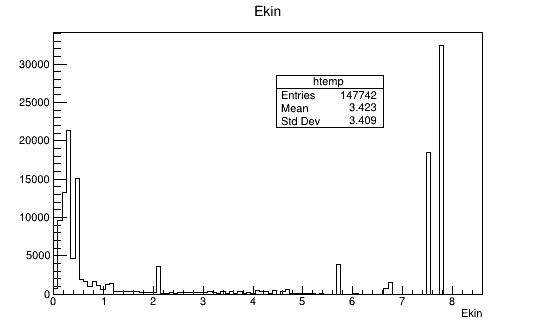 For reference, I am using Geant4 10.7.2 multithreaded with the neutron data base G4NDL4.6 (I use physics list QGSP_BERT_HP). I have the following flags set:

All gammas, then, should correspond to thermal neutron capture on the target material and characteristic X-rays with a small continuum of scattered photon energies. Intensities should roughly, at least, agree with verified published experimental values, such as those from the Brookhaven USA’s National Nuclear Data Center NNDC (Thermal Neutron Capture Gamma-Rays (CapGam)). Or so I thought… 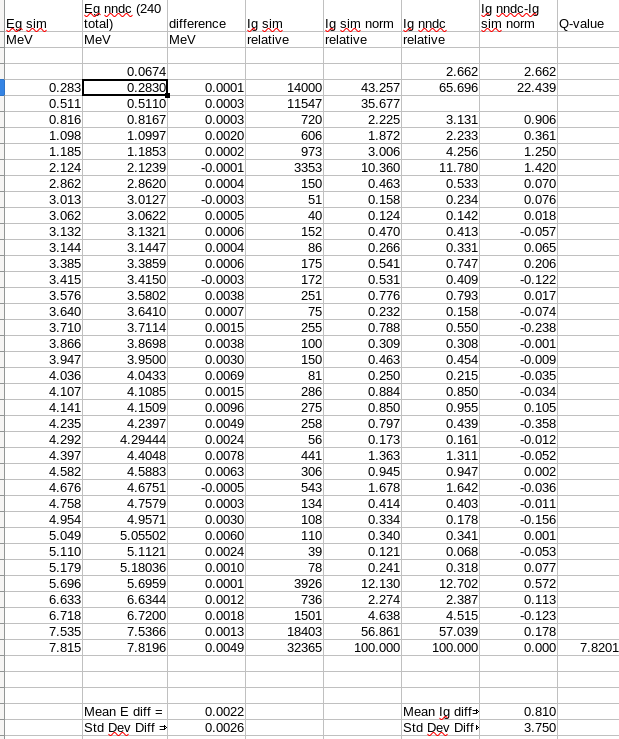 Next I ran a 1cm thick 155Gd. Because of its huge capture cross section, high Z and density, I used a target thickness of 1mm to reduce self shielding. NNDC catalogues 1009 capture gamma rays. I matched about 200 in energy, but the intensities were not even close to those of NNDC. I got similar results with 157Gd. (I have the comparisons on a spreadsheet, but this forum does not accept that file format and the spreadsheets are far too big for a screen shot. I can email them on request.)

Last, I ran 1cm thick and 1mm thick 58Ni targets. I expected good agreement like there was for 60Ni, since they have similar capture cross sections, the same or less thickness as 60Ni, same atomic charge, mass density and very similar atomic masses. However, only a few of the gamma energies matched NNDC and the intensities were not at all close. In fact, no energies above about 2.6 MeV were found, even though the 8.534 and 8.999 MeV gammas are major lines which should have relative intensities of 47% and 100% respectively. I have attached a screen capture of the spreadsheet and the spectrum for the 1mm thick target. 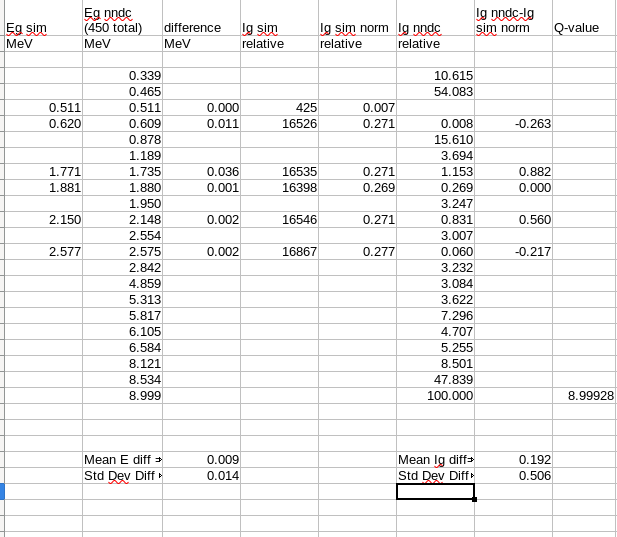 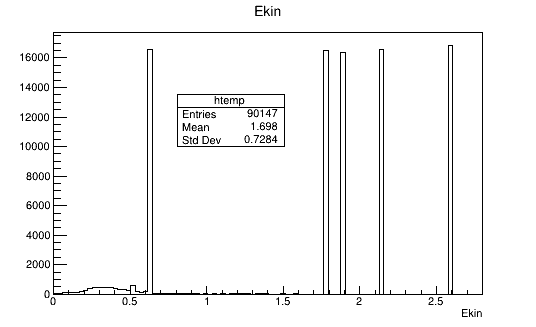 This suggests that there is definitely something wrong in the G4NDL4.6 data base for thermal neutron capture on 58Ni and possibly also for 155Gd and 157Gd. Have I missed something obvious?

I have been investigating this further and I am getting more and more puzzled. Based on some work I did regarding another post Why is there difference between simulation results and theory in gamma-ray distribution from the deexcitation of Cd-114, I thought that the NeutronHP parameters might be affecting agreement between the NNDC data (which are essentially adjusted and raw experimental values) and the Geant4 simulations. My original results as mentioned above used the following parameters:

I tried varying all of the parameters for several nuclei and, as expected, the only one that seemed to have an effect on results was UseOnlyPhotoEvaporation. So I did another set of runs with UseOnlyPhotoEvaporation set to 0. (Geometry is the same. Sample thickness is 1 cm, all materials other than target are still G4_Galactic.):

This made results for most light nuclei significantly better but those for some heavier ones worse. Specifically, with UseOnlyPhotoEvaporation=1:

Good means gamma ray energies and intensity ratios agree well with NNDC data. Fair means energies mainly agree but intensities do not. Poor means neither do. I have the details in spreadsheets, but I cannot upload them since this forum does not accept the file format (LibreOffice .ods).

Additionally some weird results occurred with UseOnlyPhotoEvaporation=0. Even though the peaks in the Ni-58 and Ni-60 spectra were at the correct energies, they all had saw-tooth shapes about 100 keV wide: 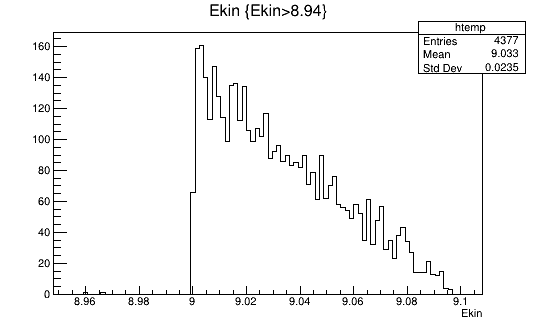 Other spectra, such as for Co-59 were blocky and lacked distinct peaks. 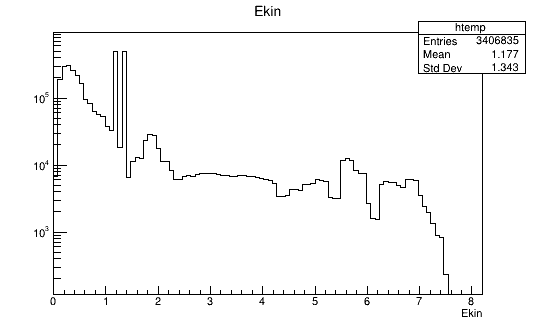 I can find very little documentation on the proper use of the ParticleHP parameters. There seems to be no detailed description of how to properly select the correct values for UseOnlyPhotoEvaporation orDoNotAdjustFinalState for a particular nucleus in advance. Is anyone aware that such a description even exists?